A helicopter overflight video of the lower East Rift Zone on June 14, 2018, around 6:00 AM, shows lava fountaining at fissure 8 feeding channelized lava flows that flow into the ocean. Lava is still flowing out of fissure 8 unabated and the channel is full. At the start of the video, standing waves in the lava channel can be seen near the vent exit. The channel appears crust-free from vent to the bend around Kapoho Crater. A surface crust forms over the channel as it spreads out during its approach to the ocean. The overflight along the ocean entry is from north to south along the coastline. The ocean entry is active along the whole length - approximately 1 mile. Small litoral explosions are occurring and there are several plumes of laze. 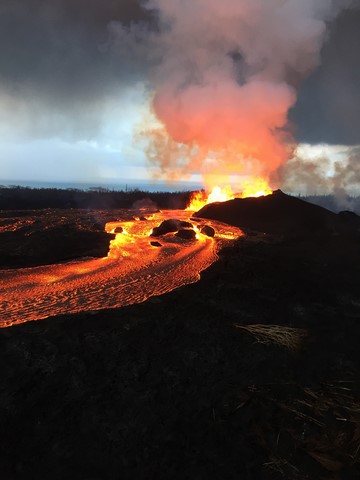 Fissure 8 fountains reached heights up to 160 feet overnight. Lava fragments falling from the fountains are building a cinder-and-spatter cone around the vent, with the highest part of the cone (about 125 feet high) on the downwind side. USGS image taken June 12, 2018 around 6:10 a.m. HST. 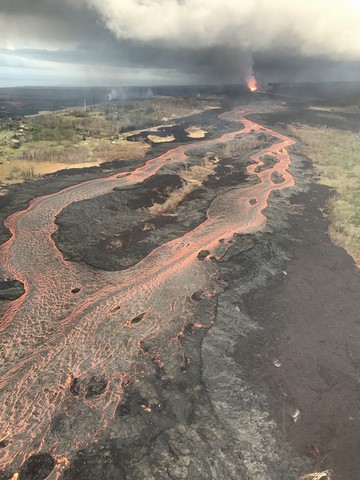 Fissure 8 (fountain visible in distance) feeds lava into an active braided channel that flows about 8 miles (north, then east) to the ocean entry in Kapoho Bay. USGS image taken June 12, 2018, around 6:50 a.m. HST. 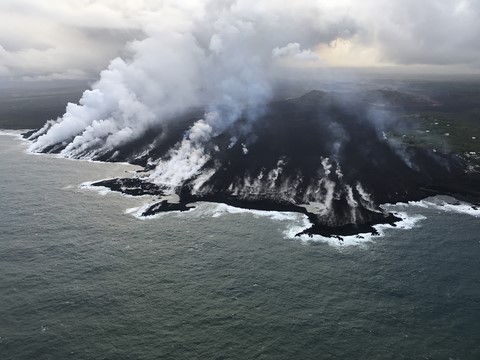 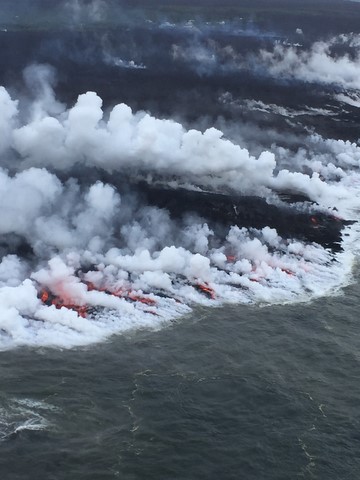 The south side of the ocean entry was most active today, with many small streams of lava and corresponding steam plumes spread along a fairly broad section of the southern part of the delta. USGS image taken June 12, 2018, around 6:13 AM.